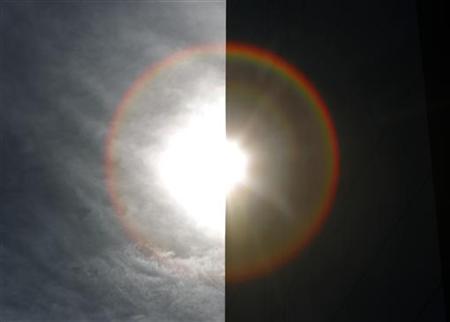 (Reuters) – Climate policymakers and scientists need to look beyond global warming emissions of carbon dioxide and take the loss of stratospheric ozone into account, researchers said on Thursday.

The stratospheric ozone layer, which shields Earth from solar ultra-violet radiation, has thinned over the South Pole over the last half-century.

This depletion of ozone has shifted the Southern Hemisphere’s climate so that dry areas in the subtropics now see about 10 percent more precipitation in summer than they used to, scientists reported in the journal Science.

“Ozone is now widely believed to be the dominant agent of climate change in the Southern Hemisphere, so this actually means that the international agreements regulating climate change cannot be confined to dealing with carbon dioxide,” said the study’s lead author, Sarah Kang of Columbia University.

“They also need to consider ozone,” Kang said by telephone.

Carbon dioxide emissions from natural and human-made sources, notably the burning of fossil fuels, is the most frequently cited target of policymakers aiming to curb climate change caused by humans.

However, the depletion of ozone in the atmosphere due largely to commercial and industrial use of chemicals containing chlorofluorocarbons has a powerful impact on large swaths of the Southern Hemisphere, the researchers found.

The stratospheric ozone layer typically absorbs ultra-violet radiation, warming the air below. With the opening of the ozone hole over the South Pole due to chlorofluorocarbon pollution, there was severe cooling instead of warming, which eventually caused a southern shift in the winds that whip from west to east around Antarctica.

As this band of winds moved toward the pole, a corresponding dry belt in the subtropics also moved southward, the researchers showed. This left room nearer the equator for a band of increased summer precipitation.

Most of this change is driven by the ozone hole, with a smaller contribution from increased concentration of greenhouse gases in the atmosphere, the study found.

Earlier this month, the United Nations World Meteorological Organization reported record loss of the protective ozone layer over the Arctic, which unlike that in the Antarctic, is not an annual occurrence.

The 40 percent loss of ozone over the Arctic came despite the “very successful” 1987 Montreal Protocol aimed at cutting production and consumption of ozone-destroying chemicals including chlorofluorocarbons and halons, WMO said on April 5.

The substances were once present in refrigerators, spray cans and fire extinguishers, but have been phased out. However, they can linger for decades in the atmosphere, so it will take several decades more before their concentrations drop to pre-1980 levels, WMO said.

http://www.theozonehole.com/    Read all about it: