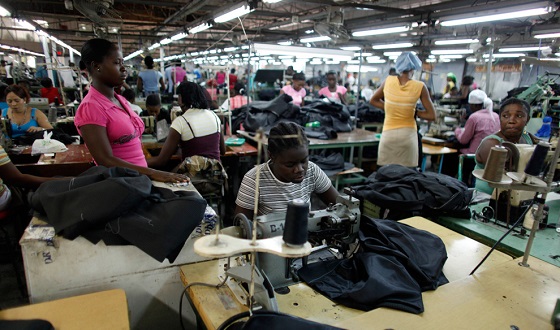 Giant clothing brand Hanes has been caught stealing from some of the poorest workers in the world, and we’ve got less than a week to stop it.

Haiti has become an apparel-producing powerhouse as global clothing brands like Hanes move factories there to take advantage of some of the lowest wages in the western hemisphere.  But workers aren’t benefiting from the boom — a new report from our friends at the Worker Rights Consortium has revealed thatevery single export garment factory in Haiti has been paying workers less than the minimum wage. And as a result, three quarters of Haitian garment workers don’t make enough to afford three full meals a day.

At the end of this week, Russell and Gildan, two of Hanes’s top competitors, are meeting with labor rights advocates and representatives from Haitian unions tomake plans to pay workers what they’re owed. But Hanes has refused to join them. That means we need to speak out now and let Hanes know that consumers will hold it accountable if it tries to ignore the workers making its clothes.

Tell Hanes to stop stealing from the poor: End wage theft at your Haitian suppliers.

This isn’t the first time Hanes has been in the public eye for trying to keep Haitian workers in poverty. Two years ago, WikiLeaks revealed that thecompany furiously lobbied the U.S. State Department to stop the Caribbean nation from raising its minimum wage to just $5 a day. Even after the garment industry got special carve-outs from the minimum wage, Hanes and its suppliers continued to mercilessly exploit its Haitian workforce.

Factories use all sort of dirty tricks to swindle workers out of their wages: forcing workers to work off the clock, refusing to pay overtime, and requiring workers to reach totally unrealistic production quotas to get their full wages. On average, Haitian garment workers make more than 30% less than what they’re legally owed. Apparel companies are flagrantly breaking the law, but the combination of the garment industry’s political clout and its importance to the country’s economy means that the Haitian government doesn’t have the appetite to hold them accountable.

Hanes could help more than 3,000 workers get millions of dollars in money that its suppliers stole from them  — it’s the top buyer at several factories, and has huge influence in the industry. But instead, the company is claiming it didn’t technically break the law as its workers struggle to survive. We need to let Hanes know that consumers won’t tolerate any more excuses.