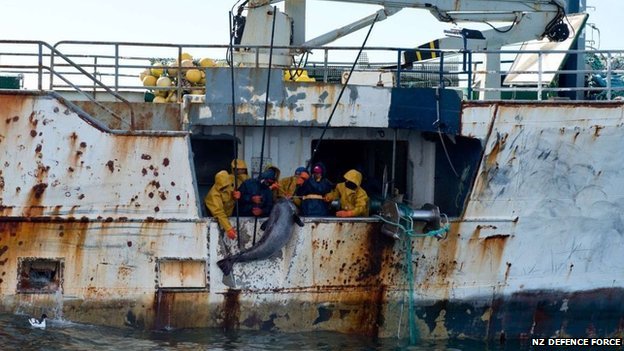 NZ Navy has what it calls “photographic evidence” of illegal tooth fish fishing.

The New Zealand navy is engaged in a stand-off with two boats thought to be illegally fishing toothfish in the Southern Ocean.

Naval patrol vessel HMNZS Wellington had been monitoring the vessels which are sailing under the flag of Equatorial Guinea, the foreign minister said.

Overnight authorities in Guinea gave New Zealand permission to board them.

But crew members barred authorities from boarding the vessels.

“The HMNZS Wellington attempted to exercise its legitimate right to board the Yongdong and Songhua earlier today but the vessels refused to co-operate,” Foreign Minister Murray McCully said in a statement.

“Due to the conditions and the evasive tactics of the masters, it was not possible to safely board these vessels.”

While the ships are flying flags from Equatorial Guinea, Mr McCully said there was reason to believe they might be linked…